Whelping- The length of pregnancy in the bitch averages 63 days, however viable puppies may be born within 5 days either side of this expected date. That moment you've been waiting impatiently for is here and you have to face the facts that you are going to be a puppy parent. Luckily, the vast majority of bitches will have their pups without any help from you or anyone else. In fact, you may be able to just sit back and watch the entire process.

Nevertheless there certainly are times when you MUST intervene -- times when the bitch and her pups will require your assistance.

Causes for concern when you know it's your time to step in:

If you notice any of the above problems please contact the vet immediately.

Pregnancy and whelping (giving birth) in the bitch can be a stressful time.
Mammary development can occur as early as 4 weeks into the pregnancy and will become more pronounced as the pregnancy develops. Sometimes  bitches will start to produce milk over 1 week before the puppies are born, whereas others will not start to lactate until the birth is underway. False pregnancy can occur in bitches, so mammary development and milk production do not always mean that the bitch is genuinely pregnant.
In the last week of pregnancy the vulva becomes enlarged and flabby and there may be a clear vaginal discharge. One accurate way to time the onset of whelping is to measure and record the bitches rectal temperature twice daily in the run up to the anticipated time of whelping, as a fall in body temperature of approximately 1°C occurs within the final 24 hours of the pregnancy.

The first stage of labour can last from 4-24 hours. The cervix begins to dilate and uterine contractions commence. Signs include restlessness, pawing, nest building, shivering, turning the head to watch the belly, possibly mild straining and occasionally vomiting. These signs may be quite dramatic in nervous bitches who may seek constant attention from their owners. It is important to realise that all of the changes described above are normal and nothing to be worried about. These signs normally progress steadily until the cervix is fully dilated and the bitch enters second stage labour.

In the second stage of labour the uterine contractions continue, forceful abdominal contractions commence and the foetuses are expelled. The bitch usually lies on her side while forcing, but will sometimes walk about and force in a squatting position
The first pup is normally born within 2-4 hours of the onset of 2nd stage labour, and the average interval between puppies is 30-60 minutes. However there can be up to 4 hours between the birth of puppies – this is no problem if the bitch is resting comfortably. However you should contact the vet if there is persistent straining for > 30 minutes and no puppy is produced. The interval between puppies usually gets longer towards the end of the delivery. The second stage of labour can take up to 24 hours in some bitches, and it is important that they are supervised by the owner during this time. You should avoid excessive interference at this stage but you should watch to ensure that whelping progresses steadily, that the puppies are released from their membranes and that they are not accidentally damaged by the bitch.
On average 60% of pups are born head first and 40% are born tail end first, so the delivery of a pup coming backwards is relatively normal and is not associated with any problems. A dark green discharge is released as the placenta separates from the uterus and this is passed during the delivery of the puppies. Normally when a pup is born the bitch will attend to it, licking at its head to open the clear membranes that cover the puppy and biting through the umbilical cord. If the bitch does not do this immediately you should ensure that no membranes are left covering the puppy’s nose or mouth so that it can breathe. You can also tie off the umbilical cord (using regular cotton thread) approximately 2-3cm from the puppy and then cut the cord below where you have tied it. Vigorously rubbing a newborn puppy with a towel can help to stimulate its breathing as well as heating it up. Newborn puppies should be allowed to suckle from the mother as soon as they can as this encourages the release of the hormone oxytocin which promotes contractions of the womb.
During delivery the bitch will have shallow rapid breathing. This can be aggravated by poor ventilation and excessive heat in the whelping area. Between the delivery of puppies the bitch may become very quiet and almost sleepy until the next puppy enters the pelvis and forceful contractions commence again.

In this stage the bitch expels the placentas or “afterbirth”. The placentas may be passed individually along with each puppy, or may be passed together at the end of the delivery. The bitch may try to eat the placenta but this can cause vomiting so we recommend that they are disposed of by the owner.

Is Lyme Disease the same in dogs as in people?

In people that are exposured to the bacterium that causes Lyme disease over 90% will show clinical signs.  Dogs around 95% will not show any clinical signs.

How common is Lyme Disease?

This can be alittle hard to answer.  In edemic areas up to 70% of all healthy and ill dogs could test positive.

What does the Lyme Test actually test for?

A positive test result documents exposure to the bacterium that can cause Lyme Disease. Thus a negative test means no exposure but a postive does not always mean an infection will occur.  If the test is positive then typically a urine sample would be requested to look for protein in the urine.

If the urine is negative for protein then absent signs of disease re-testing for lymes in 6 months and recheck a urine ever 3-6 months will be recomeended.

If there is protein in the urine then depending upon the amount of protein detected along with clincial signs the following can occur:

depending upon these test results and clincial signs antibiotic therapy may follow. 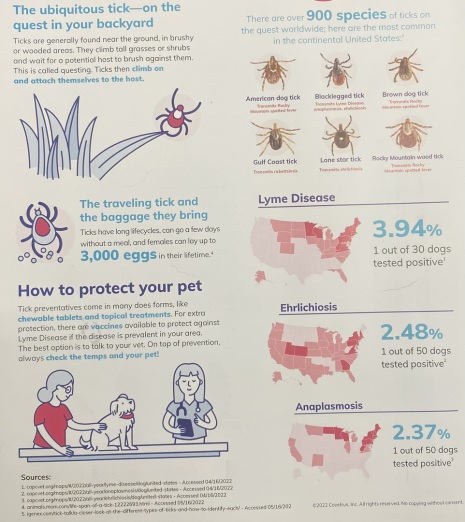 *We have a Doctor taking appointments one Saturday a month. The other 3 are technician appointment days for tech calls.

* Due to COVID-19 we are NOT doing house calls.

*For all New Clients we are booking at least 6-8 weeks out.